Although Burlingame is predominantly urbanized, a variety of environmental and scenic resources contribute to the community’s character. An important role of the General Plan is to ensure that growth and change do not negatively impact environmental resources and health.

Burlingame is located in the Peninsula Subregion air basin, which extends from northwest of San Jose to the Golden Gate Bridge. According to the California Air Resources Board emissions inventory for San Mateo County, mobile pollution sources such as cars and trucks are the largest contributor to the estimated annual average for air pollutant levels, accounting for much of total emissions in the county. Several chapters throughout the General Plan include policies and programs to promote alternative modes of transportation and reduce vehicle miles traveled, thus contributing to improvements in regional air quality and reduced greenhouse gas emissions.

Burlingame’s varied terrain, from the foothills to the Bay, supports habitats for many plant and animal species, including special status species (rare plants and animals that require special consideration and/or protection under State or federal law). While certain plant and animal species have adapted to living within the developed areas of Burlingame, native vegetation and creeks within the urbanized areas have been modified to a degree that severely limits their value as habitat for special status plant and animal species. However, the shoreline and hillsides of Burlingame provide forest and wetland habitats that are important for several special status species. Chapter 9: Healthy People and Healthy Places specifies policies and programs to restore creek beds and habitats where possible and preserve wildlife areas.

Burlingame lies within the Santa Clara Valley Groundwater Basin and contains multiple creeks that flow into San Francisco Bay. The health and function of the Bay Area’s surface and groundwater resources are critical for habitat preservation and essential ecosystem services such as flood protection and clean water resources for multiple community uses.

In addition to water quality, overall water availability is a constant regional concern. Periods of abundant rainfall and severe drought have led to fluctuations in water supply, highlighting the need for consistent water conservation measures. Chapter 9: Healthy People and Healthy Places outlines policies to improve water quality in Burlingame and promote water conservation at all times, not just during droughts.

The natural features most associated with Burlingame are its trees, and Burlingame has been designated as a "Tree City USA" since the 1979.[1] California Drive and El Camino Real have groves of large, mature trees. In addition to Mills Canyon Park and the many tree-lined streets, other scenic resources include views of marshlands and San Francisco Bay, visible from the hills and Old Bayshore Highway and Airport Boulevard. 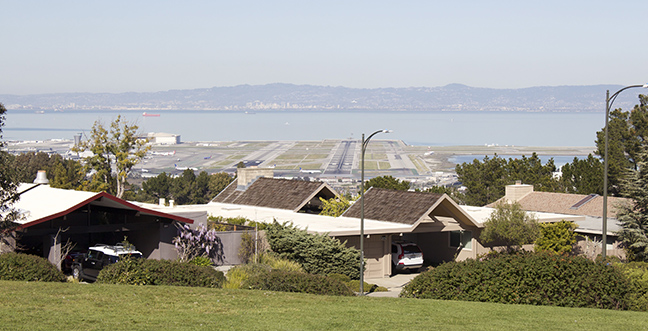 Water levels in the San Francisco Bay have risen eight inches over the past century, with rates expected to accelerate in the next century as the pace of climate change accelerates. Burlingame’s Bayfront is particularly vulnerable to sea level rise because it is not protected by natural wetlands, but instead has a hard-edge seawall along the waterfront. If sea level rise reaches projections by the San Francisco Bay Conservation and Development Commission and no actions are taken to protect or mitigate the impacts, most of the Bayfront Area and parts of Rollins Road could be under water by 2070. Chapter 8: Community Safety provides policies specifically intended to protect vulnerable areas and infrastructure from rising water levels in the Bay. Sustainability policies woven throughout the plan also target climate change and sea level rise issues.

[1] Tree City USA is a national program established by the Arbor Day Foundation that provides the framework for community forestry management for cities and towns in the United States.